So if you are a moron you do moronic things
Seriously. This is like saying "People who fall down stairs a lot seem to dislike stairs very much."
2 x
"None of these signal alarm bells to me"-Boris
"Sublime was driven by their frontman, who was, quite probably, a musical savant." -RIP Stannis
(Formerly Diceman4221)
Top I'm going to just turn my gas off and use that hot take to warm me up all winter.
0 x

What an awful voice to go along with terrible views.

I can see why that guy went with the Trump sycophant career strategy.
0 x
Top 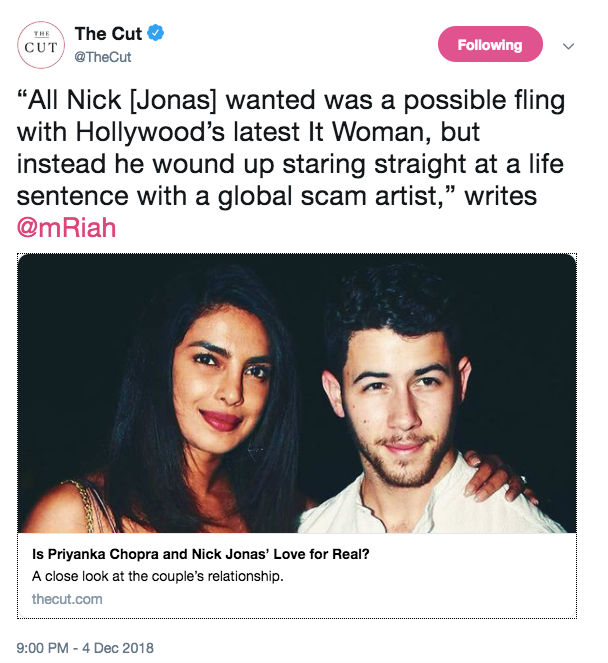 The original version of the essay is not archived. But the gist was this: After Chopra, portrayed as a cold, fame-obsessed foreigner, established herself in India, she set her sights on success in America. Part of Chopra’s ticket to the top? A white man. Tom Hiddleston didn’t make the cut, so, the piece alleged, Chopra’s team landed on Jonas. It also suggested that contrary to the couple’s story about DMing each other on social media, Chopra’s team arranged a meeting between the two of them, and painted Jonas as Chopra’s victim: “All Nick wanted was a possible fling with Hollywood’s latest It Woman, but instead he wound up staring straight at a life sentence with a global scam artist.”

Chopra’s “scam” seems to be that she’s an older woman, comes from India, snagged a famous man, and then thrust a suspiciously elaborate, multi-day wedding upon him (which is just the way Indian weddings... are).

That's like the Chappelle bit about how he was weirdly impressed by open racism down South; this thing is so blatantly every -ism under the book, it's basically like Hedda Hopper rose from the grave to write it.
0 x
Top

Guys, I'll know you'll be shocked by this, but it turns out Joe Ricketts REALLY horsefeathering sucks:

Sammy Sofa wrote:Guys, I'll know you'll be shocked by this, but it turns out Joe Ricketts REALLY horsefeathering sucks:

It's in the Business of Baseball thread you started, you nut.
1 x
Top

IMB, I’ve got something I’d like to see state reported write about.
1 x
Top

CubInOK wrote:IMB, I’ve got something I’d like to see some Oklahoma state reporters write about.

EDIT: I shouldn’t text and drive.